The journey of a Panama hat from Paja Toquilla straw to a finished hat is a wonderful and incredible one!

The Carludovica palmata, or Paja Toquilla, is a palm-like plant which is used for weaving Panama hats and is native to South America. The straw is harvested from the Ecuadorean fields, where it grows in the ideal tropical climate of the Equator, and is then cut, washed and dried, and taken to the local market to be sold to the weavers - historically, this is done on a Sunday before Mass for the straw to be blessed. 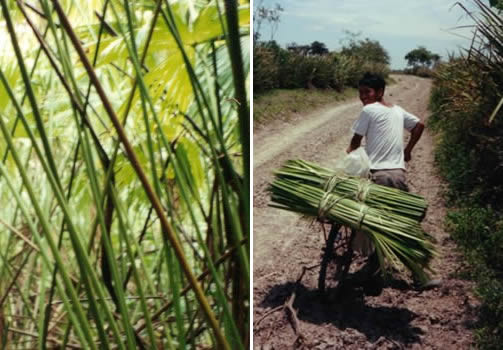 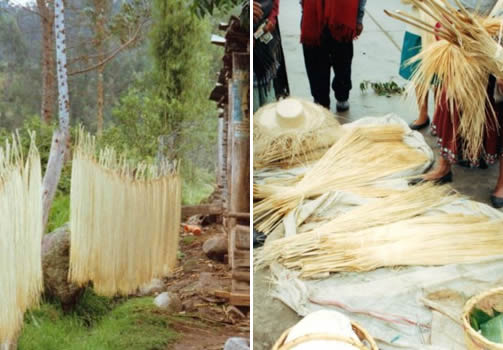 Panama hat weaving is a cottage industry carried out in the simple homes of ordinary country folk in the districts of Manabi and Azuay in Ecuador. It is a unique skill handed down from generation to generation. These craftsmen and women can produce a hat in one or two days. However, the finest, from the towns of Biblian and Montecristi can take up to four months to weave.

The greatest weavers work only by the light of the moon or when the sky is overcast. Constantly dipping their sharp pointed fingers in water, they split the fibre razor thin, and with all the virtuosity of a spinning wheel, plait ring after ring of palm into fabric so soft and dense that it equals silk.

Paja Toquilla, from which they are woven, enables such a wide variety in quality as it can be extracted from the plant in many variations of age, thickness and suppleness to suit all tastes and pockets. Having drawn the strands from the plant and graded them as required, the hats are then woven by hand, starting from the apex of the crown. This has to be done in a humid atmosphere, hence the earlier reference to weaving by moonlight and under overcast skies.

These concentric rings, or vueltas indicate where new strands have been started in the weaving process: it is the number of vueltas that determines the quality of the Panama. In the cheaper and most common quality that might take a day or two to weave, there may be up to ten vueltas whereas in the finer quality, or finos, there could be up to twenty. However, in the very finest quality the number could be as high as forty.

The finest quality Panamas have a silky, creamy smooth texture in which the weave is barely perceptible, but if held up to the light, a spiral of rings will be seen spanning out from the apex of the crown.

Once finished, the woven hats are sold at the market by the weavers, mainly to larger Panama hat distributors and companies who are able to complete the next steps of the process.

The local factories and distributors play an important role to the Panama hat process, often less spoken of, as it is they who prepare the semi-finished hats, ready to be sold to the international markets and ensuring the workmanship of each Panama is shown to its very best.

Firstly they are quality checked and sorted according to fineness of weave. The excess straw is trimmed off by an edge specialist called an azocadora, who ensures the hats do not fray. The hats are then washed and bleached and/or dyed in large vats, to give the straw a unified colour. Once the hats have been sundried out in the Ecuadorean sunshine, the natural oils of the Paja Toquilla are hammered out to make the straw soft and shiny, and then the edges are cut and properly finished. Finally, the hats are then pressed lightly to recover the original hat (hood) shape and branded with ‘fabricado en Ecuador’ - marking their authenticity. Only then, as Genuine Panama hats, are they ready to be sold for export to milliners and hat manufacturers globally, where they are shaped / blocked and trimmed for the consumer.

The Panama hoods (unfinished hat shape cones) can be blocked either by hand or on large heated steel blocks, which press the hat into the desired shape. The brim is then cut and trimmed, and an inner band (pad) such as leather or fabric is sewn in to make it to the correct size. To finish off the Panama hat, the outer trim or band is added as required.

These days, the increasing popular Panama hat comes in a whole array of shapes and styles – not just trilbies and folders - for both men and ladies, and is available in a wide range of colours, weaves, patterns and qualities, not just traditional straw colours. Take your pick from our great selection!